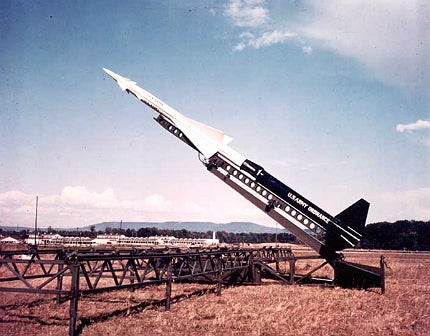 On 27 March 1999, Lt. Col. Dale Zelko was at the controls of a billion dollar F-117 stealth fighter above war-torn Serbia. It was the third day of Operation Allied Force – Nato’s bombing of Yugoslavia.

After a routine bombing run, Zelko looked down and saw a missile streaking towards him out of the darkness below. It was a surface-to-air missile (SAM).

The stealth fighter, supposedly invisible on radar, was blown out of the sky by a weapon system that was first fielded almost five decades before.

This unthinkable event was the result of an evolution of technology which began in 1953, when the US Army fielded the Nike Ajax – the very first operational surface-to-air missile system.

"Zelko looked down and saw a missile streaking towards him out of the darkness below. It was a surface-to-air missile (SAM)."

On 17 August 1944 a US Army memorandum outlined the concept for a command guided missile, with two radars for tracking and steering commands provided by a computer, which could protect large areas from bomber attack. The system would replace less-capable anti-aircraft artillery (AAA), which was already in operational use.

This proposal was taken up by Bell Labs who would develop it into Project Nike (named after the Greek goddess of victory, not the ‘swooshed’ footwear).

Seven years later, in November 1951, the first Nike I missile successfully intercepted a drone aircraft. Project Nike, like the missiles in development, was progressing at supersonic speed. In 1953, Battery B, 36th AAA Missile Battalion received its brand new Nike Ajax system, which would eventually form part of Army Air Defence Command (ARADCOM). The Ajax – officially designated the MIM-3/3A – was an all-weather 9m-long missile which was capable of flying at supersonic speeds of more than 30 miles.

Its main purpose was to defend key strategic points in the US against Soviet bombers. Ajax was a fixed-position system which included an administration area, launcher area and the Integrated Fire Control (IFC) area, consisting of a radar and operations room. These three components were mostly kept separate, but the IFC and administrative areas were sometimes together. The missiles would be kept underground and when needed would be brought to the surface and pushed along rails to the launch area.

The radar would help detect and track hostile aircraft and eventually guide the missiles onto their target.

As the Nike Ajax became operational, the Soviet Union were hot on their heels and also about to field its own SAM systems.

Paranoid that the US and Britain wanted to bomb the Soviet Union, like Nazi Germany in WWII, Stalin ordered the quick manufacture of the systems. By March 1954 – just three months later than the US – the fixed-location S-25 SAM system (Nato codename SA-1) was deployed around Moscow, although they would only become fully alert by 1956.

Soon after, the Soviets developed the S-75 Dvina (Nato codename SA-2) in 1957, which featured significantly improved missile technology and raised the altitude limit to 82,000ft. Advances in Soviet radar technology also meant the SAM batteries were able to locate targets more effectively. The two-stage Dvina missile was guided to the target within a narrow radar beam radiated by a RSNA-75 fire control radar. This system was integrated into a larger network of search radars and height-finding radars, which could cover a distance of up to 175 miles.

The effectiveness of this system was shown in 1960, when a U-2 surveillance plane piloted by Francis Gary Powers was shot down by a S-75 SAM battery in the Urals. U-2 flights were all but ended over the Soviet Union after the embarrassing incident. But that wouldn’t be the last time Soviet SAM systems would seriously hinder US air operations and deny them freedom of movement.

The Soviets also exported their S-75 to China and to communist North Vietnam, the latter used them with devastating effect during the Vietnam War. A USAF F-4C Phantom was the first SAM casualty in July 1965, another 109 planes would be lost before the end of the war. The saturation of SAMs in North Vietnam meant USAF pilots had to fly low to avoid detection by SAM radar, which exposed them to AAA.

As a response, the US began developing counter-measures and appropriate tactics which could blunt the savage effect SAMs had on air operations. These tactics survive to this day and play an important part in air power doctrine. By the mid-1960s aircraft like the two-seater F-100F were fitted with radar homing systems, which could detect and hone in on the radar signals emitted from an IFC. This was borne out of a project called ‘Wild Weasel’ aimed at developing counter-SAM technology and doctrine.

"As the Nike Ajax became operational, the Soviet Union were hot on their heels and also about to field its own SAM systems."

Wild Weasel missions were incredibly dangerous. The first squadron to perform these missions, 354th Tactical Fighter Squadron, had all but one plane left after just 45 days in service. As technology advanced and the SAM threat failed to subside, the US Air Force employed greater counter-measures and weaponry. New missiles, like the anti-radiation AGM-45 Shrike, could hone in on a radar signal and ‘ride the enemy’s radar’ back to the source. But if properly trained, the SAM operators could turn off their radar at the right moment in order to lose their attackers.

Powerful new electronic counter measures were also deployed to interfere with radar signals from SAM sites, including jamming equipment. Technology – like the AN/ALQ-99E jamming system – could radiate signals towards enemy radar, making them unusable. This was used alongside older radar counter-measures like chaff – small aluminium strips that clutter a radar operator’s screen with erroneous targets.

These tactics survive in US military doctrine today, especially in Suppression of Air Defences (SEAD) operations. SEAD is military action which suppresses and then destroys enemy SAM and AAA sites, along with other air assets, giving friendly forces complete airspace superiority. Both Gulf Wars in 1991 and 2003 and air operations over the Balkans, shows how effective this strategy can be. In the recent Libya campaign, the US and its allies did not lose a single aircraft to enemy fire – despite the Gaddafi regime fielding effective SAM technology.

The US replaced their AGM-45 Shrike with the AGM-88 HARM missile in the 1980s, which can hit targets even if its radar is shutdown. The US and other western countries also started to rely more on stand-off weapons like cruise missiles, which legacy SAM systems cannot intercept. The other key technology that thwarted many SAM systems, and their radars, was stealth technology. With no stealth fighters being shot down before or since 1999, the F-117 downing in Serbia can be seen as an aberration.

The utility of SAMs

Despite recent conflicts suggesting otherwise, the answer is yes. SAM technology has been going through a renaissance period during the 21st century. Russia and China have both developed significant ‘counter-counter-measure’ technology, which can seriously degrade the capability of airborne jammers and anti-radiation missiles. The introduction and improvement US and Israeli systems like Patriot and Iron Dome also show the effectiveness of the modern SAM. These make the first Nike Ajax system look like a pea-shooter in comparison.

China currently field the FT-2000, a truck-mounted mobile SAM, which is designed primarily to target jamming aircraft, airborne warning and control systems (AWACS) aircraft, and air radiation wave targets. The FT-2000 is designed to detect the electromagnetic signals emitted by jamming platforms and also has a passive homing system, which means it does not transmit electromagnetic waves itself. The FT-2000 can effectively target a jamming aircraft using its own jamming signal against it.

This system, manufactured by the China National Precision Machinery Import and Export Corporation (CPMIEC), was controversially chosen by Turkey for its missile defence system in September this year.

Russia has also fielded the S-400 Triumf (Nato codename SA-21), designed and manufactured by Almaz-Antey. The S-400 features the 40N6 missile which can destroy targets at ranges up to 250 miles away. The warhead also features an active radar homing head, which can target an aircraft autonomously without the need for ground radar. If an aircraft tries to jam the incoming missile’s radar, the missile can switch to anti-radiation mode, and target the jamming source. Escape is almost impossible.

Unlike its Soviet predecessors, the S-400 can also be used as a ballistic missile defence platform. Since 2007, detachments have been stationed across Russia as a response to the US deployment of Patriot systems in Europe.

"SAM technology has been going through a renaissance period during the 21st century."

The S-400 is deemed so sensitive by the Russian authorities that it will not be exported in the near future, instead the S-300 will continued to be sold to foreign customers.

These technologies may significantly reduce a military’s ability to carry out so-called strategic ‘shock and awe’ operations with cruise missiles in the future. Down at the tactical level, systems like Israel’s Iron Dome also show the effectiveness of SAM systems for even the smallest projectiles, such as short-range rockets and artillery fire.

With the rising military power of China and continuing military aspirations of Russia, these capabilities – especially in missile defence – will become ever-more sophisticated. The sixty years that have passed from the first deployment of the Nike Ajax have seen a revolution in the conduct of air operations, which can be attributed to the development of this fearsome weapon.

Nato is on the brink of fielding an integrated air command and control system in four member countries.