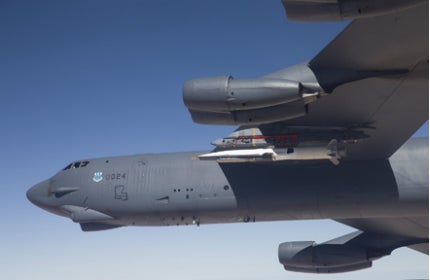 The unmanned vehicle flew for three and a half minutes after its release from a B-52H Stratofortress bomber, accelerating to Mach 4.8 within 26 seconds. The X-51A accelerated to Mach 5.1 before making a controlled ditch into the Pacific Ocean.

The designs include a single-engine aircraft with and without canards, as well as a twin-engine fighter, and programme chief engineer Huseyin Yagci was quoted by Flightglobal as stating that all three concepts feature a design optimised for low radar cross-sectional density, internal weapons bays and the ability to super cruise.

The successful launch proved the team’s ability to accurately navigate the aircraft within controlled airspace surrounding an aircraft carrier, while seamlessly passing control between mission operators aboard the ship and Mission Test Control Center at NAS Patuxent River.

Aircrews from the RAF’s 10 Squadron also completed simulator-based training at the same location to conduct the actual AAR sortie.

Release to service approval for Eurofighter Typhoons is expected to be granted later in 2013, while full service capability with a core fleet of nine tankers is scheduled to be declared by April 2014.

A derivative of Airbus Military’s A330 multirole tanker transport (MRTT), the Voyager is designed to replace the RAF’s existing L-1011 and VC10 tanker / transport aircraft, which are approaching the end of their service life, for air transport and tanker operations.

Involving hardware integration and testing, the review will enable the team to perform comprehensive ‘day in the life’ testing of the ORS-2 bus, eventually leading to hardware acceptance by the air force’s ORS Program Office.

Northrop Grumman Aerospace Systems Missile Defense and Advanced Missions vice president Doug Young said the completion of test processes demonstrates that the company’s design addresses ORS’s programme objective requirements and brings the government closer to the launch of the vehicle that could change the way satellites are manufactured.

"We are bringing network avionics technology to spaceflight and giving the nation an affordable option to respond to rapidly changing, multimission needs," Young added.