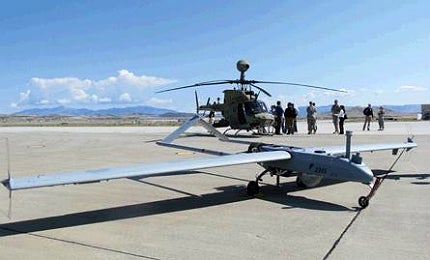 Unmanned aerial vehicles have long been early adapters of new materials technology because of two key factors; the necessity for reducing weight to maximise endurance and the opportunity offered by the reduced risk of having no air crew on board.

The high-tech industry of motor racing has been one major inspiration – sports car specialist Lola Group Materials supplies its composite structures and manufacturing know-how to UAV manufacturers, including BAE Systems, Elbit and Thales.

The company is now working with Hybrid Air Systems on the long endurance multi-intelligence vehicle (LEMV), a football-pitch sized hybrid airship which Northrop Grumman is developing for the US Army.

Alongside established composites, carbon nanotubes, which are revolutionising physics with their amazing physical, electrical and chemical properties, hold promise for a range of applications aboard UAVs. As well as forming lightweight structural components, they can create tiny sensors, act as a resistive heater to de-ice aircraft wings and provide shielding for sensitive electronics.

But the next generation of functional materials could progress beyond even these innovations to take UAVS to new levels of duration and functionality.

Many modern materials used in UAVs and other defence applications boast properties that include being lightweight, flexible, strong and resilient to impact. One alternative offers all these, plus it can conduct electricity, is transparent so sensors can see through it, is derived from sustainable sources and is 100 times cheaper than carbon nanotubes.

"Many modern materials used in UAVs and other defence applications boast properties that include being lightweight, flexible, strong and resilient."

Nanocellulose consists of cellulose fibres extracted from wood fibre and formed into a jelly-like paste of 2mm-wide needle-like crystals or tiny strands of cellulose fibrils. The ‘paste’ can be shaped into very stiff and lightweight structural components, with eight times the tensile strength of steel, while the crystalline form can also be used to form absorbent aerogels.

The US Department of Defense has expressed an interest in exploring the properties of nanocellulose, as have defence contractors including Lockheed Martin. As well as UAVs, its military applications may include lightweight armour and a cheaper alternative to glass and carbon-fibre. Unlike some innovative materials, it is also very safe, both during its manufacturing and in the final product.

The opportunities for using nanocellulose in UAVs are obvious. Like its competitor materials, it can be used for lightweight, sturdy structural components, enabling unmanned aircraft to stay aloft longer and resist damage on landing. But it also enables cameras to be protected behind the same material as it is clear and form part of payload networks due to its electrical conductibility.

One major disadvantage has prevented it from being widely used to date; the structure collapses on exposure to water, but this can be simply overcome by painting or coating it with an impermeable covering.

Self-healing materials have attracted a great deal of attention in the structural engineering world, and they could now be used to ensure UAVs or their on-board systems damaged while in flight could continue their missions and land safety.

University of Alabama researchers developed a self-healing skin structure consisting of alternating layers of polyimide sheets and an ultraviolet (UV)-curable epoxy on a copper-clad polyimide substrate. The skin is integrated with LC (combined inductor and capacitor) circuits which can detect damage by changing resonant frequency. When the skin structure is damaged, the UV-curable epoxy is released and is cured by ambient sunlight.

More recent research by Bristol University is investigating vascular systems containing repair fluids that work like blood, to flow in where damage to composite structures has taken place and set. However, it presents a significant challenge to manufacturers to incorporate the vascular structures into components, and fluid flow problems need to be overcome so it only sets when it is outside the vessel.

Bigger structural damage is harder to mitigate, but in 2009 Rockwell Collins demonstrated autonomous recovery and safe landing of an unmanned aircraft after severe damage to the wing and tail, under an extension to its damage-tolerant flight control work with the US Defense Advanced Research Projects Agency (DARPA). It would enable an aircraft to land even with 60% of the wing missing.

Signs are that self-healing properties will be in demand for future military UAVs. India recently announced that self-healing structures will form part of the specifications for the Aeronautical Development Establishment’s (ADE) Future Unmanned Aerial Vehicle Programme.

Beyond structural components, future UAVs could incorporate advanced functional materials that could contribute to the function of its on-board systems. Thermoelectric materials generate an electrical current that could be used to power payloads or charge an on-board battery to extend flight times.

"Thermoelectric materials generate an electrical current that could be used to power payloads or charge an on-board battery."

One candidate that exhibits a significant temperature differential is the Shadow reconnaissance and surveillance UAV, a mature technology used by the armies of the US, Australia and Sweden. It is powered by a Wankel internal combustion engine, and tailpipe temperatures can regularly climb past 2,000°F, a significant contrast to the frigid air at the high altitudes it navigates.

The US Army Research Laboratory (ARL) is investigating whether this thermoelectric effect could be used to generate electricity to power on-board electronics for longer than is currently possible. John Gerdes, mechanical engineer with the Technology Development and Transition Team of ARL’s Vehicle Technology Directorate, said: "Perhaps if the technology is advanced in later years, it will be possible to extend flight times, increase available mission scope and add additional sensors or payloads."

Research continues apace on revolutionary materials that could constitute the UAV of the future and its on-board components, but what will remain true is that the unpiloted nature of the UAV makes it the perfect platform for the maturation of novel technologies.

With recession-struck governments slashing spending, the private sector has become the lynchpin of the military aerospace sector.