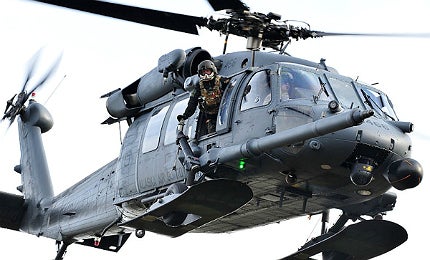 The AEHF are the next generation of protected military satellite communications satellites designed to deliver enhanced global, survivable, protected communications for US warfighters and its allied militaries, including the UK, Canada and Netherlands.

Lockheed Martin Protected Communications area vice president Mark Calassa was quoted by Defense News as saying in a statement that the contract reaffirms the government’s trust in the company’s ability in affordable delivery of AEHF satellites to address requirements of strategic and tactical operators worldwide.

US Air Force to progress with CRH programme despite troubles

The USAF confirmed that it would move ahead with its multibillion dollar combat rescue helicopter programme, despite troubles sourcing bidding companies. Air force spokesman Ed Gulick revealed the intention, but refused to reveal the number of submitted bids.

A request for proposal (RFP) for the $6.8bn CRH programme, which is designed to replace the US military’s ageing Sikorsky-built HH-60G Pave Hawk helicopter fleet, was floated by the USAF in October 2012.

The UK MoD was reported as being close to ordering a new batch of Brimstone air-to-surface missiles from MBDA, aimed at replenishing stocks used by the RAF during Operation Ellamy in Libya.

Brimstone 2 variants were originally set to enter service in 2012, but due to a 28-month delay the new Brimstone order is set to bridge an inventory gap until such a time that the Brimstone 2 missiles are delivered.

The Israel Missile Defence Organization completed a series of pre-planned trials of the upgraded Iron Dome anti-rocket defence system, validating enhancements that are expected to boost the system’s capabilities.

The USAF completed its testing of a flying wireless router, allowing targeting pods installed upon fighter aircraft to serve as communications relays for ground forces.

The router has been designed for Litening and Sniper advanced targeting pods, which are mounted on all legacy fighters.

Data gathered during the testing will be sent to the Precision Attack Systems Program Office by the middle of February 2013, following which the software will return to Eglin AFB for operational testing in anticipation of planned entry into service in 2014.