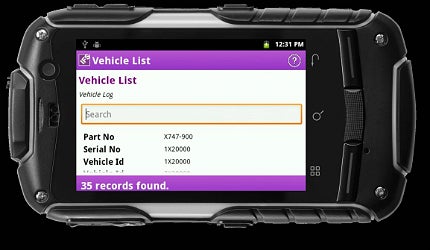 Air force engineers tell an anecdote that the C-130 Hercules technical orders, or repair manual, could fit in a briefcase; the technical orders for the C-5 Galaxy needed to be carried in a C-130.

As aircraft, ground vehicles and naval vessels become ever more complex, it is a near-impossible job for military engineers to keep up to date with all the parts that could possibly go wrong.

Added to that, a lack of access to supply chain management data on the workshop floor can delay a decision to replace a part that might not be in stock or patch it up for scheduled maintenance at a later date.

IFS Defence believes it has come up with a solution; a smartphone app that that can access essential part availability and repair data over a secure network alongside technical orders, while providing the ability to share photos and information on the repair at hand.

"It is a near-impossible job for military engineers to keep up to date with all the parts that could possibly go wrong."

Founded in 1983, IFS Defence specialises in enterprise resource planning (ERP) software, which integrates internal and external management information across an entire organisation to help run it efficiently. With some of the most complex interrelated data to manage, the aerospace and defence (A&D) sector is one of its key markets.

The company’s IFS Applications fleet and asset management solution is used to track all the General Eclectic (GE) engines in the world, while it has also been selected by Lockheed Martin for local supply chain management for the F-35 Joint Strike Fighter (JSF) programme Autonomic Logistics Information System (ALIS).

In the UK, IFS software forms the backbone of Lockheed Martin’s Joint Asset Management Engineering Solution (JAMES) for the Ministry of Defence, while it will also be used by BAE Systems for its contribution to the F-35 programme and is employed on virtually all Royal Navy ships.

The new IFS Flight Log mobile smartphone app is designed to address the challenges faced by A&D organisations by enabling key operational data relating to flight, crew and assets to be captured in real-time on smartphones, and integrate directly with back-office data.

Kevin Deal, vice president for Aerospace and Defence for IFS North America, says: "Our ability to extend our application out to the user that are repairing or serving the equipment in the military is what’s important. By using touchscreen apps we can extend that functionality out to these folks, and they have a window into the back office without them having to bring it with them, while using a technology that they’re familiar with."

Brendan Viggers, head of product management, IFS Defence, adds: "We’ve been providing ERP software to all three armed services for 12 years. In the past, we’ve seen that to get the software to the soldier and get the soldier to the asset, they would have to take a laptop with the entire software on it, plus all the necessary communications kit. Inspired by the recent trend for military smartphone apps for soldiers to download and get information to their own devices, we thought we’d tackle our own app."

The latest version of IFS’s desktop ERP software, called IFS Applications 8, offers a component called Flight Log which enables users to capture information as they move an asset from A to B. That might be a major or a minor fault found during use, specific information around the usage of the asset, such as the number of flying hours for an aircraft, information about the crew schedule, or technical information linked to a document.

The mobile app was inspired by the Saab engineers who use the desktop version of the IFS software for depth maintenance on the Gripen fighter jet and wanted to carry the same information on their smartphones.

Communications take place over existing infrastructure, so secure networks in place at military bases can be used where required.

"Action-taking data, such as the HOW-MAL [malfunction data reporting] code that you’re working on, tends not to be classified anyhow, it’s just the nuts and bolts information required for that person on the flightline to understand what parts are available," says Deal.

"If there’s a fault there they can take a picture using their phone and send it back, rather than running back, wasting time and risking exposure to what could be a harmful environment. The app allows them to take advantage of existing technology to track it back to the back office and automatically update it."

Reducing the paper trail to keep aircraft in the air

For environments where a mobile or wireless network is not available, IFS Flight Log operates in disconnect mode. When first loaded, it will sync relevant data from the back office so that it is always at hand, then stores data about the work being carried out until the user picks up a connection again at the maintenance bay or over another wireless network.

IFS Flightline was launched at a recent user conference and has been received well by users who are already suggesting future improvements. One of these is optical character recognition (OCR), as used for number-plate recognition, to capture fault codes directly and automatically return information about it from the manual. But perhaps the key benefit is a much reduced learning curve, as users already know how to use smartphone apps.

"When you bring these ERP systems into large organisations like the military, one of the main benefits is reducing training effort," says Viggers.

"We can get applications out to troops to help them with their job, which has a positive knock-on effect back at base where they’re getting more accurate data faster, a reduction in paper and paper trails, and the faxes having to come back from forward between operating bases and maintainers."

And that means military aircraft spend less time in the hangar and more time in the air, keeping engineers, pilots and accountants far happier.

Results of a year long investigation uncovered more than a million bogus parts destined for use by the US Air Force.