As the world’s air forces battle for aerial superiority, the hazardous conditions created by jet engine noise have led to a rapid increase in complaints of hearing loss. Complaints that have risen to such an extent that the US Navy labelled noise-induced hearing loss as the number one occupational health expense.

"A jet engine’s distinctive roar is created by turbulence and vortices resulting from the flow of fuel and air entering the combustor."

Statistics tend to back up this claim, with disability payments paid to servicemen rapidly increasing since 1999.

Hearing-loss does not only cost the military in terms of military disability settlements for those permanently affected, however.

The cost can also be felt as a result of lost time, decreased productivity, loss of qualified workers, the cost of retraining and ongoing medical expenses. 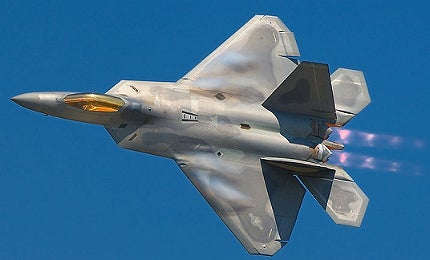 At 150dB, the F-22 Raptor has one of the loudest jet engines in US service. Image courtesy of Rob Shenk.

The loudest sound a human ear can tolerate without pain is around 120 decibels (dB) and, with jet engines capable of sounds in excess of 145dB, continuous operation in close proximity can prove to be extremely hazardous. The US Navy determines any sound above 84dB to be hazardous, with navy officials having to take extreme precautions because of the working environment aircraft carrier workers find themselves in.

Unlike other locations, hazardous sounds have increased potential for damage aboard naval aircraft carriers. Not only were some older vessels constructed without the use of noise reduction technology and materials, but the area in which aircraft operate is restricted to an area of approximately 4.5 acres. Above deck, levels can reach 145dB, while even below deck levels can reach 100dB.

These levels are due to the noise created by jets taking off exciting the vessel’s structure, with the noise reverberating off the ships components and creating sounds approaching 100dB.

While it is impractical to issue each and every serviceman with protection equipment to be worn at all times, engineers have continued to investigate ways in which the noise can be stifled at the source. This has created a quandary for air forces across the world, as the optimal approach would be to reduce a jet engine’s velocity – not an option given the highly demand mission requirements placed upon military jets.

One such method to reduce engine noise that the US Air Force could entertain is a novel ‘noise sponge’, fitted inside an engine’s combustion chamber. Developed by University of Alabama, US, professor Ajay Agrawal, the device follows the thinking that prevention could well be better than cure.

A jet engine’s distinctive roar is created by turbulence and vortices resulting from the flow of fuel and air entering the combustor. Differences in the vortices and turbulence create difference pressures within the engine. These different and fluctuating pressures create noise within the combustor, with the roar emanating from the engine as a result. Levels of noise are only exacerbated by the act of combustion occurring within the engine, the very definition of adding fuel to the flames.

In response to the growing need for a reduction in jet engine noise, Ajay Agrawal developed the ‘noise sponge’, which is capable of softening the acoustic profile of a jet engine without capping its performance. Composed of heat and pressure-resistant hafnium carbide and silicon carbide, the device is simply fitted inside the combustion chamber and works in three ways.

From engine roar to Underground rattle

It blocks some vortices from occurring, creating a more level mix of air and fuel inside the engine cylinder. This results in less pressure forming within the cylinder, therefore reducing noise.

"The noise generated by engines is also likely to become a key performance parameter in future contract tenders."

The device also facilitates a more equal spread of fuel within the combustion chamber, hindering fuel from collecting in a specific area. Any such collection of fuel would create a ‘hot spot’ within the engine, with the resulting increased temperatures serving as an amplifier for engine noise.

The device also acts as an acoustic sponge, absorbing sound waves and preventing them from ricocheting around the combustor, further reducing the engine’s capacity for noise. The results have been promising, with the device displaying its ability to reduce noise by as much as 30dB, transforming the 140dB roar of a jet engine to a far less dangerous 110dB; equivalent to the rattle of an approaching train on the London Underground. 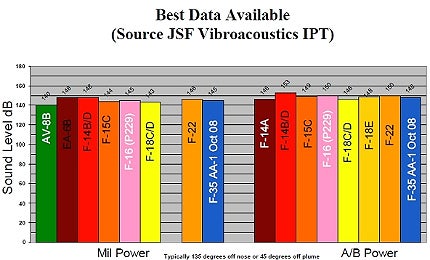 Whether a device such as the noise sponge is deemed acceptable for military use remains to be seen, but the US Department of Defence considers reducing jet engine noise without affecting performance an area worth considerable investment and research. The Versatile Affordable Advanced Turbine Engines (VAATE) programme, a joint effort involving the US DoD, Nasa and DOE, is focused on a ten-fold improvement in engine capabilities by the year 2017. The US Air Force currently invests approximately $175m a year into the project.

"The device also acts as an acoustic sponge, absorbing sound waves and preventing them from ricocheting around the combustor."

Adaptive cycle technologies are currently being investigated by the Adaptive Versatile Engine Technology (ADVENT) project under VAATE, tasked with combining technological developments into a single propulsion system that interchanges between an increased thrust mode for performance, or an efficient mode to lower fuel consumption.

Although noise reduction is not a principal area of research under ADVENT, adaptable cycle technologies are estimated to result in a reduction of jet noise greater than 5dB.

The noise generated by engines is also likely to become a key performance parameter in future contract tenders, confirming the importance bestowed upon the factor by senior military officials. An April 2009 Naval Research Advisory Committee report on jet engine noise reduction cited an agreement between government, industry and academia that a path similar to the one taken by commercial aviation must be taken in order to achieve significant reductions in tactical jet engine noise.

This could potentially change the way in which future aircraft are ordered, as currently the airframe prime contractor does not have total system design responsibility, with the way in which specific engines are integrated into a singular airframe having a significant impact on the acoustic signature of the aircraft. Should a single manufacturer be given responsibility to design both the airframe and engine, further reductions in jet engine noise could be realised.