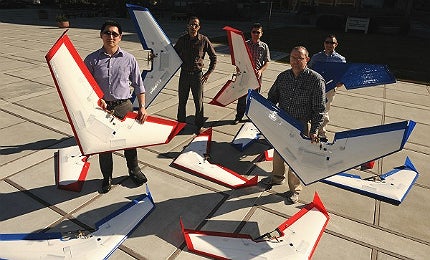 Dogfights between aircraft have occurred since the earliest days of military aviation, from the era of the Red Baron through to modern fighter jets engaging enemies during conflicts in the Balkans. The next generation of aerial combat could see the pilots safely on the ground controlling swarms of hundreds of unmanned aerial vehicles (UAVs) battling it out in the skies.

"The key stages between now and the final battle will see the team grow the numbers of UAVs swarming in a live-fly environment."

Surrounded by dozens of brightly-coloured kite-like remote-control aircraft mounted on launchers made from plastic pipes, a multidisciplinary team of students at the US Naval Postgraduate School in Southern California seem unlikely candidates to be planning an epic battle.

However, in 2015, a swarm of 50 of their drones will take on 50 from a rival team to prove advanced swarming and friend-or-foe identification algorithms in a high-speed aerial clash.

For assistant professor Timothy Chung and his Advanced Robotics Systems Engineering Lab (ARSENL), the purpose of the work into what he dubs aerial battle-bots is twofold.

"From the operational side we want to accelerate and push the boundaries of autonomy science and the ability for our unmanned systems to do complex coordinated tasks," he says. "We want to give our students the opportunity to work on a project that is defining future concepts and technologies that are at the forefront of robotics research, but is operationally relevant to the military."

The research will address specific problems that may be faced by future swarms – multiple robots operating in sync – battling with others, such as how they will be controlled and by what human-to-robot ratio.

""It’s like having 50 people at a cocktail party all trying to communicate with each other," says Chung."

Though the researchers started using UAVs with a military heritage made by Lockheed Martin and Presaris, they are now adapting remote-control aircraft from hobby stores to keep costs down for the high volumes they will be using. The cost cutting extends to the on-board controls, which make wide use of open-source hardware and software.

"The vision is to have on-board autonomy for all of our assets," says Chung. "We’re taking radio-controlled piloted aircraft and putting autopilots, computers and sensors aboard them to make them UAVs. We’re passing control from the human on the ground to computers on-board."

To help achieve the project’s goals, Chung has brought together a multidisciplinary team of post-graduate students and interns, many of whom have military backgrounds themselves.

The Bat, formerly known as the KillerBee, is a low altitude and long endurance unmanned air vehicle (UAV) system.

The unique approach proved itself when the team experienced difficulty hand-launching multiple aircraft to have them aloft simultaneously. The first units launched would be towards the end of their battery life by the time the final ones flew. To solve this, the enterprising students built low-cost launchers using plastic plumbing pipes from the local hardware store to stabilise and launch the UAVs.

"There’s a trade-off between how quickly you get aloft and how many launch platforms you have on the ground in order to be able to launch them simultaneously," says Chung.

Though the project is still at an early stage, the researchers are already considering how the aerial battle-bots might identify enemy aircraft in flight. Potential solutions include on-board cameras that could identify the shape of the rival UAVs or markers on them, or technologies currently used on manned aircraft, such as beacons or transponders.

One of the hot topics the research aims to validate through experimentation is one faced by militaries operating UAVs in a combat environment; identifying the optimal ratio of on-board autonomy to control by human operators.

"We can make our assets more autonomous so we need fewer humans to operate them, but the complexity of that autonomy needs to be high, as you’ve transferred intelligence from the ground operators to the assets," says Chung. "This risks making them so expensive you don’t want to crash them or use them."

Chung says the solution requires a holistic systems engineering approach that takes into account a wide range of factors, such as operator fatigue, cost, limitations in the technology and the command and control structure underpinning the operation.

"The next generation of aerial combat could see pilots on the ground controlling swarms of hundreds of unmanned aerial vehicles (UAVs)."

This summer, Chung’s students have been focusing on building the fleet of UAVs and developing some of their payloads, including autopilots. They have also started work on developing a virtual battle arena where they can model the UAVs operating in a virtual air space to accelerate their development.

The key stages between now and the final battle will see the team gradually grow the numbers of UAVs swarming in a live-fly environment from five versus five all the way up to the goal of 50 versus 50. The simulated world will be used simultaneously to demonstrate their capabilities in a virtual environment, holding virtual exhibition battles to keep the costs low while driving research to make the development time shorter.

Though the term aerial battle-bots has fired up interest, the participating UAVs will not be weaponised.

"I am planning for the initial stages primarily just to be a GPS-based proximity game of tag," says Chungs. "Endowing the UAVs with a laser-tag set-up so they wouldn’t have to eject a projective would be a viable option. The idea is to focus not on the specific military elements of this, but rather to highlight autonomy research that doesn’t rely on things getting shot."

The RQ-11B Raven (Raven B) is a lightweight and low-altitude remote-controlled unmanned air vehicle (UAV) system.

The numbers involved will also require a re-think on the operator interfaces and a reassurance of reliability with so many elements that could go wrong.

The aerial battle-bot challenge has obvious benefits for education and eventual military applications, and forms part of a wider initiative launched by the Secretary of the US Navy, called the Consortium for Robotics and Unmanned Systems Education and Research (CRUSER).

CRUSER aims to address not just the technical challenges but the social aspects of unmanned systems and robotics, including the ethics and legality of using them in warfare, as well as social implications such as manning and cost-benefits.

"The aerial battle bots project is just one element of CRUSER bringing participants together from across the country to discuss these problems, while recognising that no one person can accomplish this type of project," says Chung. "We are standing on the shoulders of giants."