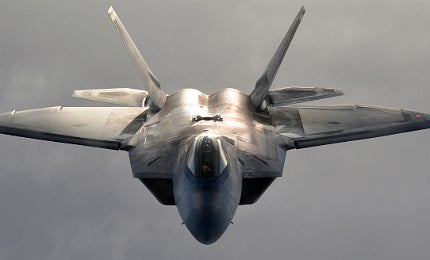 The US Air Force’s fleet of F-22 supersonic fighter jets was cleared to resume normal flight operations following the successful completion of eight near-term actions identified by the Air Force Scientific Advisory Board.

The actions, which included the installation of a modified combat edge upper pressure garment valve, eliminated the need to restrict all F-22 flights within a 30-minute flying distance in order to enable quick recovery and landing during an unfavourable event.

The aircraft was also cleared to conduct aerospace control alert operations, following the installation of an automatic back-up oxygen system (ABOS) in the aircraft based at Joint Base Elmendorf-Richardson in Alaska, US.

Altitude restrictions for training flights on the ABOS-modified Raptors have incrementally been removed; while those on non-ABOS equipped F-22s remain in place.

The programme, which involved 30 test flights, commenced in August 2012 to explore and evaluate the aerodynamic characteristics of the blended wing body design concept, which is hoped to reduce fuel burn, emissions and noise of future aircraft.

Most of the test flights saw the aircraft operate for approximately 30 minutes, reaching speeds of up to 140mph and climbing to attitudes of around 10,000ft.

The US signed a multibillion dollar deal with Israel to supply new defence capabilities to the country, enabling it to maintain air superiority in the country.

Besides routinely collaborating with Israel in development of Iron Dome, Arrow and David’s Sling defence systems, the US Department of Defense (DoD) also ensured the country received an all-time high of $3.1bn in foreign military financing this year, despite budgetary constraints.

The US is also planning to start work on a new multiyear memorandum of understanding (MoU) that will extend security funding for Israel beyond 2017.

The UK Ministry of Defence started command and control operations of MQ-9 Reaper UAVs in Afghanistan, using a newly constructed facility based at RAF Waddington in Lincolnshire, UK.

The move marks the first time that UAVs have been operated from the UK five years after their procurement for intelligence, surveillance and reconnaissance missions in Afghanistan.

The UK had been controlling the RAF’s fleet of five Reaper drones from Creech Air Force Base in Nevada, US, and the new centre was built in 2012 as part of the 2010 Strategic Defence and Security Review.

Pogosyan revealed that the company is expecting to complete both the aircraft’s preliminary tests and commence operational trials this year, with the flight testing programme set to feature five flying prototypes.

Flight tests aboard Lockheed Martin’s F-35 aircraft were cleared to restart, having been grounded, while Iraq confirmed an eagerly anticipated arms deal with Russia was not cancelled after all.

Forecast spending for 2012 has been lowered as government officials confirm the UK will pull out of Afghanistan by 2014.North Korea continued to defy the world’s wishes and conducted a further nuclear test, while the USAF sanctioned upgrades to its troubled F-22 fighters.