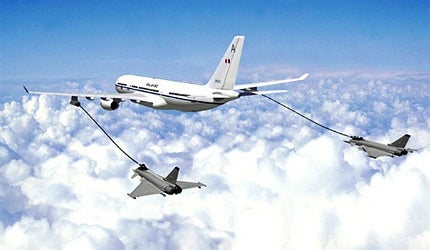 As most major air forces begin to feel the bite of the current round of severe budget cuts, they are increasingly looking towards the commercial aerospace market and the competitive edge of the private sector to provide the new equipment, innovative technology and systems support they need.

This trend has seen the USAF recently go down the route of commercial-off-the-shelf (COTS) procurement to rescue its Deployable Radar Approach Control (D-RAPCON) programme, and the Royal Australian Air Force turn to Rolls-Royce to improve fuel efficiency for its C-130 fleet, using techniques first developed for civil airlines.

All around the world the trend is growing – perhaps nowhere more so than in Britain.

"Industry and the UK Government have come together to fund 500 Masters-level degree places in aerospace engineering."

This wide spectrum relevance has undoubtedly helped companies to weather the recent economic storms and accounts for much of the sector’s success. As UK Prime Minister David Cameron put it, with an annual turnover exceeding £20bn – 17% of the global market – "UK aerospace is, quite simply, flying."

Speaking ahead of the Farnborough Air Show, he was announcing a range of steps being made to support the industry in Britain, including the £50m puchase of an Airbus A400M flight simulator from Thales Training and Simulation, to support the RAF’s forthcoming C-130 replacement.

Such state-of the-art synthetic training plays a major part for UK pilots, and it already has a significant level of private company involvement; Serco, for instance, currently train all of the RAF’s helicopter pilots at the advanced facility at RAF Benson. While simulator training – and the role of the private sector in it – is widely expected to grow in the future, the scope of the British embrace of the commercial market goes much further.

The Airbus A330-200 multirole tanker transporter (MRTT) solution for the RAF’s future strategic tanker aircraft (FSTA) programme is arguably the most obvious example. Behind all the acronyms lies what has been described as the world’s largest defence Private Financing Initiative (PFI) arrangement – a 27-year, £390m per annum deal with the AirTanker Consortium to provide the RAF’s air-to-air refuelling and air transport capability.

In many respects, it appears the RAF has placed itself well ahead of the curve on this one. Although FSTA is not scheduled to deliver full service until mid-2016, the project can trace its origins back to 2000 – long before there was much hint of the financial woes to come, or their subsequent effect on today’s defence budgets.

With these now forming the established backdrop, however, there could be wider potential opportunities open to the private sector, as military expenditure moves away from big-ticket items.

"There could be wider opportunities open to the private sector, as military expenditure moves away from big-ticket items."

A recent report from Alix Partners suggested that defence cuts will see a shift during the coming years from large capital programmes to upgrades, support, technology retro-fits and service-provision, as the emphasis moves to extending the life of ageing legacy equipment.

As Gear explains, that would fit into a long-standing pattern. "Retrofits and upgrades have always been an important part of defence aviation.

"It is possible the focus may shift more on to this area with current constraints. We constantly explore ways to extend and improve the capabilities of our existing product range, so we are well placed to contribute to these upgrade requirements."

Inevitably, the drivers across both civil and defence aviation are essentially the same – reducing weight and ownership costs, improving performance and maximising availability, while minimising maintenance – and these are areas where the major commercial tier one suppliers excel. It is presumably also one of the main reasons why the burgeoning link between the UK aerospace sector and the RAF seems destined to continue.

In any case, the uniformity of the flight environment makes for an obvious lock-up between the two. According to Gear: "Innovation is a two way street with both defence and commercial aviation contributing, each side exploring the potential of all evolving technologies for their own needs and to suit their imperatives. The industry is perhaps becoming better at fully exploiting the potential of all developments, whether military or civil."

Few examples make the point better than the company’s own electro-thermal ice protection technology, which has been selected to combat some of the most severe challenges facing the very latest aircraft platforms – including both the B-787 wings and the F-35 Lightning II JSF.

It is, Gear points out, a case of the industry gearing up to offer improved efficiency, greater performance and lower lifecycle costs. Small wonder, then, that governments are taking note.

Nevertheless, delivering this to air forces and airlines alike will place additional demands on personnel and expertise. July’s Alix report highlighted a shortage of competency as one of four macro challenges facing the aerospace industry: "Currently there is limited expertise in supporting several new programmes in parallel while production is ramped up so steeply.

"The processes for building these new aircraft are not established enough to facilitate rapid and effective training to expand the workforce, and there is limited experience available of managing these complex projects."

In addition, with many up-and-coming developments likely to play an increasing role during the next five to ten years, especially the likes of composites, intelligent coatings and additive manufacturing of metal structures, growing the expertise in these new technologies will also be essential.

Achieving that, it seems, will also be a joint effort. Industry and the UK Government have come together to fund 500 Masters-level degree places in aerospace engineering during the next three years to help provide the next generation of skilled engineers, and many commercial sector companies are also heavily supporting other initiatives.

The future is very bright in the view of GKN Aerospace, which is a major sponsor of the forthcoming Bristol Technology and Engineering Academy. "We need to encourage more of our young people towards a career in engineering whether in aerospace or other sectors," Gear says. "Aerospace is a focus for the government today, who recognise its value to the UK economy. There is growth, huge innovation and real opportunity in the industry – there have been few better times to enter aerospace as a career."

The UK aerospace sector was recently described by UK Business Secretary Vince Cable as "a national success story." In these times of hard numbers and dwindling defence spending, it has arguably never been more important to make sure it stays that way.