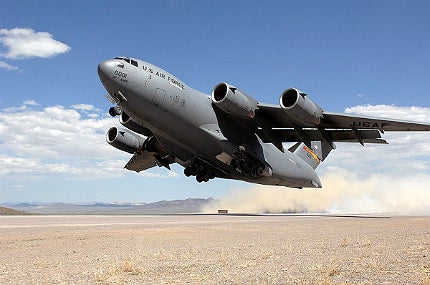 Working in collaboration with Dynetics and other industry research organisations, the company will develop technology for a next-generation electronic warfare (EW) algorithm suite, which will help current EW systems counter emerging radar threats.

Announced a week after the final aircraft delivery to the US Air Force (USAF), the decision will impact around 3,000 employees supporting the C-17 production programme in Long Beach, Macon, Mesa and St. Louis.

Still under contract to manufacture 22 aircraft, the company will, however, continue after-delivery support for the global C-17 fleet, as part of the C-17 Globemaster III integrated sustainment programme (GISP) performance-based logistics (PBL) agreement.

The US Air Force Institute of Technology (AFIT) has entered a co-operative research and development agreement (CRADA) with Locata to develop and demonstrate the company’s new technology for use in satellite-based GPS receivers.

AFIT will initially design and develop a Locata Vray patent-based GPS-frequency multi-element switching antenna prototype, and subsequently use it along with the prototype Vray for demonstrating the feasibility of using Locata technology to boost GPS receiver performance.

QinetiQ has signed an agreement with Llanbedr Airfield Estates (LAE) to further develop enhanced capability for the future unmanned aircraft system (UAS) operations in the UK.

Supported by the Welsh Government, the agreement primarily seeks development of the Wales UAS environment as a world-class UAS test and evaluation facility, through incorporation of LAE as an operating centre in north-west Wales.

Expected to serve as the catalyst for the supply of extended UK UAS operating capability in early 2014, the agreement will also enable UAS programme development in support of both defence and civil-related opportunities.

The DND’s Bids and Awards Committee (BAC) had declared the bidding for the helicopters a failure, citing that the lone bidder, the Rice Aircraft Services and Eagle Copters joint venture, failed to satisfy eligibility requirements, reported by the Manila Bulletin.

Carried out in December 2012, and February 2013, the first and second rounds of public bidding were also called a failure by the committee due to similar reasons.

Canadian Public Works and Government Services Minister Diane Finley said the government is committed to ensuring the procurement proceeds in an open, fair and transparent way, providing the air force with its required capability, while offering best value to Canadian taxpayers.