Details of the aircraft, dubbed the SR-72, were revealed by Aviation Week on November 1 and confirm that Skunk Works are working on a design that can fly at Mach 6, twice as fast as its predecessor.

Defence planners say the development of a hypersonic reconnaissance aircraft will address the perceived gaps in coverage which have been created since the SR-71 was retired from the US Air Force (USAF) in 1998.

Making it to Mach 6

"Defence planners say the development of a hypersonic reconnaissance aircraft will address the perceived gaps in coverage."

Satellites and sub-sonic manned and unmanned aircraft, which replaced the SR-71, are not thought to be as capable in areas of denied or contested airspace and countries with sophisticated air defences and detailed knowledge of satellite movements.

Developing a scramjet engine that is capable of Mach 6 travel has been one hindrance to a successor, especially with fears that costs could spiral. But Lockheed Martin thinks it has an answer.

Lockheed Martin’s portfolio manager for air-breathing technologies Brad Leland told Aviation Week: "Skunk Works has been working with Aerojet Rocketdyne for the past seven years to develop a method to integrate an off-the-shelf turbine with a scramjet to power the aircraft from standstill to Mach 6 plus."

"Our approach builds on HTV-3X [a DARPA project cancelled in 2008], but this extends a lot beyond that and addresses the one key technical issue that remained on that programme: the high-speed turbine engine," Leland added. 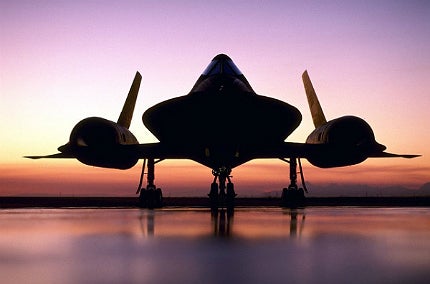 Despite the concept being unveiled by Aviation Week, the project has still not secured funding from the US Government.

The next stage of the project will see the manufacture of an optionally-piloted flight research vehicle (FRV) which will be the size of an F-22 and powered by a single, full scale engine.

The first flights for the FRV are expected to take place in 2023.

A high speed weapon for a hypersonic aircraft

Possible armaments for a strike version of the SR-72 could include Lockheed Martin’s High Speed Strike Weapon (HSSW), a hypersonic missile concept.

"The HSSW will also take advantage of ramjet propulsion just like the SR-72."

The missile is able to strike heavily defended targets and achieve high survivability through altitude, speed and stealth.

The HSSW will also take advantage of ramjet propulsion just like the SR-72, giving it unprecedented speed and responsiveness.

Flying at Mach 3 and at a height of nearly 85,000ft, the SR-71 was almost impossible to shoot down. During its entire operational history none were lost to enemy fire.