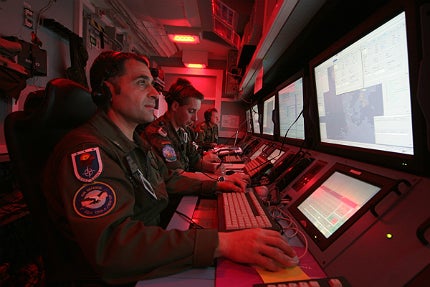 The goal of having an integrated air command and control (AirC2) capability among the Nato alliance has long been a desire for military commanders.

The way Air C2 has been accomplished in the last 60 years – through a variety of Nato and national systems – is now seen as inadequate in meeting future requirements. Militaries want a single, integrated air defence system, which will provide the capability to plan, task and execute tactical air operations in, and outside, the Nato area.

Since the end of the Cold War, Nato has conducted several campaigns predominantly using air assets from multiple member states. These have varied in intensity on the spectrum of conflict, from humanitarian missions to armed interventions, seen most recently in the 2011 Libya campaign and the on-going operations in Afghanistan.

To support this broad-spectrum of operations, Nato has looked to equipment that will enhance Command, Control, Communications, Computers, Intelligence, Surveillance and Reconnaissance (C4ISR) capabilities.

Nato is meeting this challenge with the Air Command and Control System (ACCS) programme. The history of ACCS dates back to the early 1990s, when Nato began a number of programmes aimed at improving the interoperability of alliance members and in-turn improving C4ISR capabilities.

This ‘smart defence’ approach also focused on the importance of affordability and cost-effectiveness.

"This ‘smart defence’ approach also focused on the importance of affordability and cost-effectiveness."

The ACCS system is being built by ThalesRaytheonSystems (TRS), a consortium of Thales and Raytheon. It was formed in 2001 from Air Command System International (ACSI), the legal entity of the first Thales and Raytheon consortium, which won the ACCS contract in 1999. Since then, TRS has been performing systems development and engineering and – in the later stages – a comprehensive integration, validation and verification phase.

"ACCS will be a highly interoperable, highly integrated air command and control system," explains vice president of Nato C4I business line within TRS, Stephen Dumont. "When Nato carries out its important air missions it can be done in a highly coordinated fashion. It’s a very important thing for Nato going forward."

"It is probably one of the biggest and most important projects within Nato because of the relevance to Nato’s mission. One only needs to turn on the news today and look at what’s going on around the world, a multinational response is always considered. In order for that to be effective, you need a system like ACCS to be in place," Dumont adds.

ACCS features common core software, open architecture and a system-wide human-machine interface. In addition to providing these necessary capabilities to support critical missions, Dumont says the system will save money by using a common support approach and more opportunity for sharing resources, including Nato personnel as well as spares and maintenance costs. It is hoped that a ACCS operator in, for instance, Turkey would be able to operate the same system in France or any other Nato country – and vice versa.

The main customer for ACCS is the Nato Communication and Information Agency (NCIA), which was formed from three other agencies in July 2012.

"The ACCS system is being built by ThalesRaytheonSystems (TRS), a consortium of Thales and Raytheon."

"The system is not introducing something new in terms of capacity of detection, because all that information will come from already existing systems," says NCIA ACCS programme director Enzo Montalti. "What is new is the ability to manage a large number of capabilities remotely and provide the operator on a single workstation with an entire world of information and possibility."

"In the air domain – where time is a very important factor – the capability to elaborate in a few seconds essential information and enable the operator to make a decision is essential," Montalti adds.

To support Nato’s critical task of out-of-area missions there will also be deployable COACs and ARSs which are transportable and provide operational planning and tasking capability. Deployable ARS gives Nato operators the functionality for sensor management, surveillance data links, identification and aircraft and SAM control.

In April 2013, TRS reached a significant milestone when it validated ACCS during eight weeks of extensive testing at the NCIA’s System Test and Verification Facility (STVF) in Glons, Belgium. As of September 2013, TRS are preparing to transition ACCS from the test programme into a series of Initial Operational Test and Evaluations (IOT&Es) so the end-users can start to work with the system and prepare for operations.

France, Germany, Belgium and Italy are validation nations where TRS is in the process of testing the ACCS system and the unique interfaces in each country.

The ACCS systems in Belgium and Germany have already been successfully tested and dry-run tests are being carried out in France and Italy.

The next phase will be to roll out ACCS entities across Nato and ‘replicate’ the system, but it remains to be seen how many countries will eventually introduce ACCS, especially as political and economic factors influence its integration.

It is estimated that at least another ten Nato countries will begin to integrate ACCS into their air command and control systems in the future.

But this still leaves another 14 members who have yet to decide whether to integrate ACCS and the UK, in particular, is one of those.

"All the European countries will be covered by ACCS but that doesn’t mean that every single country will have a specific installation, but the Nato territory can enjoy the benefits of the system," says Montalti.