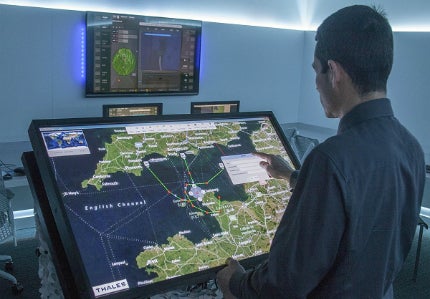 The simulated environment allows people to ask the all important question – what if? And from this they often get an impressively accurate reply that imitates what would happen for real.

Defence manufacturers and other leading organisations in the air defence sector are taking advantage of the increasing sophistication of technology and computer power to show off their present, and future, capabilities.

Of course, simulations have been around for many years and in much simpler forms than the high-tech gadgetry we see today. Scientists and engineers would ‘simulate’ how vehicles or weapons behaved using complex models and a slide ruler – an analogue computer. Nasa scientists working on the Apollo moon missions used this method to predict how a spacecraft could take off and reach the moon.

The introduction of modern computer technology has given simulation not only a visual element, such as real-time displays and scenery, but also much more advanced computational power which was impossible with just a slide ruler. This has allowed for much more experimentation with different scenarios and an endless stream of variables which can be influenced.

This now makes simulations a go-to tool for defence planners and manufacturers, especially in the air and missile defence sector.

"Of course, simulations have been around for many years and in much simpler forms than the high-tech gadgetry we see today."

The AAOOC forms part of Thales’ package of integrated air defence solutions which was launched last year. The package incorporates everything from StateSHIELD, a complete air defence solution for a country, to mobile weapons such as the RAPIDFire system. The AAOOC is able to demonstrate the capabilities of many of these systems, all in the comfort of a modern office environment.

"We consider the battlelab a tool in supporting the customer in the identification of a need, in the definition of the solution, in the experimentation of the solution, and the assessment of candidate solutions," explains strategy and business development director at Thales Advanced Weapons Systems, Laurent Duport.

"It is very difficult to tailor solutions just using paper and very difficult for the customer to understand what will be the benefits of what we intend to deliver," he adds. Thales can customise air defence solutions for each military, taking into account a country’s specific geography, threats and military capabilities, in a short time period.

Customers can take part in different scenarios at the AAOOC and become actively involved in the simulation itself, rather than just spectate. Use of battlelabs and wargame scenarios allows Thales to collaboratively and progressively develop an optimised architecture, often mixing legacy assets and new assets in order to fulfil operational objectives set out by the customer.

"This means that instead of just pushing a button on the computer we are able to invite the customer to participate in the execution of the scenarios and themselves play the role of the operator in the architecture," Duport adds. "This is mainly as command and control but also as firing operators for radar operators – then they are really involved in the execution of the process."

Why do defence manufacturers offer simulations when nations employ their own analysts to assess the adequacy and effectiveness of capabilities and systems? The answer is, unlike an indigenous simulation system which may only use constructed simulation, equipment such as Thales’ AAOOC use parts of the real systems, including the fire control system and command and control system. It is often not possible to use these systems unless a military has bought the equipment beforehand.

One of the principal benefits of this evaluation method is driving down costs associated with development and procurement for both manufacturers and customers. For the customer, it allows them to test the claims the manufacturer is making when it is selling its product without making a multimillion dollar purchase. Beyond this, simulating capabilities permits concept development and experimentation which could also save money going into the future.

"You learn about a lot of areas you never thought of, so that helps create realistic specifications and better specifications," says Frans Kleyheeg, a senior defence advisor at the Dutch non-profit organisation TNO. "At the end of the day, that saves you an awful lot of money, because it’s easier to have something in the system when it is delivered as compared to modifying the system later on, because that’s twice or triple the money."

TNO is an organisation for applied scientific research based in the Netherlands, enshrined in Dutch law and also independent from government and industry. Like Thales, it specialises in using simulation tools for the benefit of military research and aids the field of procurement and concept development. Although not a government agency, TNO performs many of the functions that are carried out by the MITRE agency in the US and Defence Science and Technology Laboratory (DSTL) in the UK.

TNO have developed an extensive simulation environment called Joint Research on Air Defence Systems (JROADS), which simulates platforms, sensors, communication and weapon systems and the interaction between all the components. JROADS is a modular simulation platform, meaning almost any kind of weapon platform can be simulated from PATRIOT missiles to ships and aircraft. The software has a number of uses which contribute to the air and missile defence sector.

Kleyheeg identifies four main areas for the use of simulations in air defence; namely training, testing and validating, procurement support and policy development.

One of the main areas for TNO is the development of government policy. "At TNO we have two big groups of customer. First of all government and government agencies and multinational institutes like the UN, Nato and the EU who do not have the skills and knowledge to do everything themselves. They come to us when they want to procure a new railroad, train, missile interceptor and you can run that in a simulation. JROADS is specifically for air defence."

The future for simulation

"Simulating capabilities permits concept development and experimentation which could also save money going into the future."

As computers become faster and smaller it is likely we will see ever more complex simulations being carried out by defence manufacturers and organisations. Researchers, like those at TNO, are looking at ways to combine both real-world training exercises with bigger simulated environments.

In 2004, a Nato exercise called First WAVE (Warfighter Alliance in a Virtual Environment) was conducted which was a large-scale virtual exercise referred to as Mission Training through Distributed Simulation (MTDS).

With the addition of the World Wide Web and faster global connections, this has made distributed simulation exercises much easier than they were only a decade ago. It means military personnel from different nations can come together in the same exercise without leaving their own country.

For example, during First WAVE, a pilot in Germany was able to fly an aircraft simulator alongside a real US Air Force F-16 flying in the US. This technology could also be used for air and missile defence training among different operators.

But we may still be some time away before we see this level of simulated integration, as Frans Kleyheeg explains. "There are people that for whatever reason are not believers in simulation, I think it takes at least one generation to fully exploit the capabilities of simulators and computers."

A Harrier jump jet is undergoing restoration at the Imperial War Museum in Duxford ready for display at the London site next year, to commemorate the centenary of World War I.