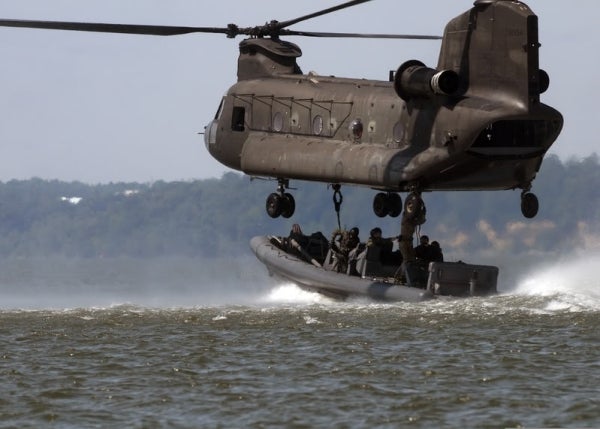 For helicopter pilots, one of the most challenging parts of their job is picking up, carrying and dropping off an underslung load. Also known as external load operations, this type of flying requires extensive training, skill and a little bit of mettle thrown in for good measure. Anything from vehicles, supplies and even boats can be lifted by an aircraft to assist military and civilian operations.

This type of load carrying also presents significant challenges for the ground crew, who are responsible for preparing the load and hooking it onto the belly of the helicopter using a series of straps and nets. This often involves a 12 tonne helicopter hovering just inches above their heads as they prepare the load for flight. A sudden gust of wind could send a helicopter crashing into the ground, crushing the soldiers below.

Because of this, external load operations require maximum discipline from every crew member and meticulous teamwork. On board the helicopter, a crewman will be responsible for monitoring the load from pick-up to drop off. In emergency situations they could even jettison the equipment, so as not to endanger the aircraft.

With their ability to hover, helicopters can drop supplies and lift equipment in hard to reach places such as mountainous terrain or areas with heavy vegetation. This has been particularly useful in disaster relief and humanitarian work, when equipment needs to be dropped and recovered in areas with no road access. The flooding in Cumbria and Gloucestershire in the UK during the last decade is just one example of this.

Since 2001, Nato forces in Afghanistan have relied heavily on this capability, especially as many forward operating bases (FOB) across the country are in remote areas. Underslinging loads avoids sending large convoys of ground vehicles to FOBs – which often take days of planning and execution – and reduces the risk of soldiers being killed in IED blasts.

The RAF currently uses both the Chinook and Merlin helicopters extensively for underslung missions both at home and abroad. The Chinook alone is able to lift around 10,000kg of equipment and supplies, which requires personnel and equipment to be as robust as possible.

"If you’re on operations in Afghanistan, a lot of loads will be flown to an airhead and then they need deploying to forward operating bases," says Squadron Leader Paul Bolton, head of the helicopter section at the Joint Air Delivery Test and Evaluation Unit (JADTEU) at RAF Brize Norton.

JADTEU is responsible for developing procedures to safely carry materiel and personnel by air in the British armed forces.

"It may be that we cannot drive them there for whatever reason – it is too dangerous or it is inaccessible – therefore, if you fly it in as an underslung load, the load is prepared in a relatively safe environment. It is then flown in and as soon as the load is on the ground it can be released and the aircraft can be away.

"You’ve got minimum time either in the hover or on the ground in a potentially hostile area so you can be in and out very quickly delivering whatever that load is whether its food, munitions, tents, or vehicles," explains Bolton, a former helicopter navigator with experience of flying external loads during the Bosnia conflict.

The other option is to load the equipment or supplies internally, which can take several minutes to unload, thus increasing the possibility of a helicopter being hit by enemy fire.

Just how dangerous it could be was shown in August 2009 when a RAF Chinook was hit by a rocket propelled grenade in Afghanistan shortly after dropping off cargo. The RPG caused the helicopter to crash land but luckily, the crew escaped alive.

Ground crews are responsible for preparing a load on the ground which then attaches via a strop – a fabric strap – to the helicopter. Loads such as artillery pieces, vehicles and other helicopters can be lifted with ‘leg slings’ by attaching them to hard points on the equipment. Loose items like rations, ammunition and soldiers’ backpacks can be placed inside a cargo net and transported with relative ease.

"The RAF currently uses both the Chinook and Merlin helicopters extensively for underslung missions both at home and abroad."

It is the responsibility of the JADTEU and Sqn Ldr Bolton to develop the most effective way to safely carry these loads and in what configuration. For new equipment to be cleared for underslung operations in the British armed forces, JADTEU will liaise with manufacturers and advise them how best their product can be lifted. Every piece of equipment has to go through strict ground-based testing before any flight.

Sqd Ldr Bolton explains: "We do an engineering airworthiness assessment of the load to make sure it is in accordance with military standards and also to make sure that it is fit to fly. It has not got anything that is going to fall off. All the doors should have second locking devices on them and we make sure there is nothing on the exterior where the air flow can get underneath and, as the aircraft is flying through the air, we don’t get any loads peeling back and becoming detached."

"Then if we are happy with that from a static assessment on the ground we bring it in and carry out a static trial. We’ve got a gantry in our unit where we use instrumented sling sets, the same spec as you get on an aircraft but we have strain gauges and load cells on them. We then hang this load underneath a gantry to make sure we don’t exceed any of the load limits on any of the sling legs."

Bolton says his unit will produce a draft scheme after the static trial. "We then go fly the load and come up with the flying characteristics, including the maximum speed, angle of bank, rates of climb and rates of descent that load can achieve. Then we produce that in a full schematic diagram with text and publish it in a Digital Air Publication which all the squadrons have access to."

"Loose items like rations, ammunition and soldiers’ backpacks can be placed inside a cargo net and transported with relative ease."

Different load configurations mean different flight characteristics for the pilots. When loads are attached via just one hook on the underbelly of the aircraft, the loads can become unstable at higher airspeeds, causing it to spin on its vertical axis, causing an uncomfortable swinging motion. On top of this, equipment such as aircraft and boats can even generate their own lift, making them particular unstable in flight.

Thanks to JADTEU and their stringent testing, pilots rarely have any nasty surprises when flying external loads. In fact, recovering aircraft and moving loads has become fairly routine for the helicopter section at Brize Norton and is ‘actually quite straightforward’, says Bolton.

This was put to the test in October when a Royal Navy helicopter was forced to make an emergency landing in the Scottish Highlands and the only way it could be retrieved was by helicopter. Those lucky enough to be in Glencoe would have looked skywards to see a navy-grey Sea King helicopter dangling from a RAF Chinook. The lift went as planned and the Sea King will eventually fly again.

In April this year, Bolton’s team even helped move a Gloster Meteor – the RAF’s first ever jet aircraft – to a museum in Gloucestershire, UK, by lifting it with a Chinook.

Gazing into the crystal ball, it is even possible to see a time in the future where technology will remove the need for humans to be involved in underslung operations. Unmanned helicopters such as the Kaman K-MAX and Lockheed Martin’s MQ-8C are specifically designed to carry out external load missions. The K-MAX is even fully autonomous, meaning it does not require human interaction, apart from starting up.

The K-MAX carries out around five or six missions a day to forward operating bases in Afghanistan and represents the future tactical direction of underslung load operations. But for the foreseeable future, these types of operations will still require highly-trained crew using old workhorses like the Chinook.

Future Vertical Lift: The end of the helicopter as we know it?

As the backbone for militaries across the world, the standard design for helicopters has not changed significantly for more than 50 years.