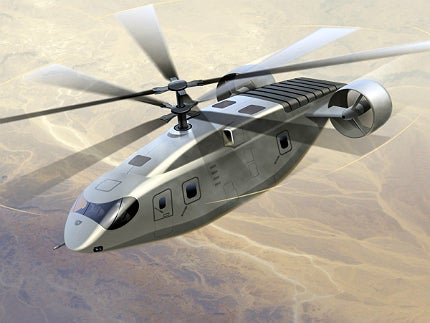 Is it a plane? Is it a helicopter? Is there a pilot? These used to be easy questions to answer when describing an aircraft, but it is no longer the case. The need for greater capabilities at reduced costs means a number of revolutionary vertical lift aircraft are now being considered, to replace ageing helicopter fleets. The US military’s Future Vertical Lift (FVL) strategic plan, published in October 2011, is just one part of this.

Designers are doing away with traditional helicopter designs featuring the familiar main rotor and smaller rotor on the tail. Instead, designs are being put forward that include a greater use of tilt-rotors – where the rotors move horizontally for cruising, currently seen on the V-22 Osprey – and other non-traditional technologies.

Another design that is gaining traction among manufacturers is the so-called ‘compound’ helicopter, which incorporates forward-facing rotors, such as those on a standard propeller aircraft, along with a main rotor. Both tilt-rotors and compound designs significantly increase speed, while still retaining vertical landing and take-off capabilities.

Newer helicopter designs are also incorporating more unmanned technology including greater autonomy. Military planners are hoping that helicopter ‘drones’ can replicate the tactical success of their fixed-wing aircraft, like the Predator.

The rise of the drone helicopter

"Designs are being put forward that include a greater use of tilt-rotors – where the rotors move horizontally for cruising."

Unmanned helicopters have been with us for some time, but their unreliability in operational environments has meant their adoption has been limited. Boeing’s attempt at a UAV helicopter – the A160 Hummingbird – was tarnished with several crashes and technical problems, which led to its cancellation last year. But this may be about to change.

In October 2013, Northrop Grumman’s new MQ-8C Fire Scout unmanned helicopter made its first flight at Naval Base Ventura County, California. The MQ-8C is based on a Bell 407 commercial airframe and big brother to Northrop’s MQ-8B unmanned helicopter. The C-variant can carry three times the payload of the MQ-8B and fly twice as long.

The US Navy plans to acquire 28 aircraft and will eventually fly missions from Littoral Combat Ships. The programme is a US Navy Rapid Deployment Capability effort in response to an urgent operational requirement for a martime-based ISR platform with longer range to support special-warfare units.

"Changing out the airframe, installing control systems and avionics, and then conducting a first flight of the system in a year is truly remarkable. I couldn’t be more proud of the team," he added.

The need for unmanned capabilities has become particularly acute during wars in Afghanistan and Iraq, which has seen a number of aviation incidents involving rotary aircraft. This is due to the low altitudes and slow speeds helicopters operate at, making them vulnerable to enemy fire and mechanical faults.

This year alone has seen five helicopter incidents in Afghanistan, including a Black Hawk crash in March, which killed five US soldiers. Although most were attributed to mechanical failure, it still highlights the danger of helicopter operations.

In March, the US Marine Corp extended indefinitely the use of two unmanned K-MAX helicopters – developed by Lockheed Martin and Kaman Corp – in Afghanistan. The aircraft are used for base re-supplies, removing the need to deliver supplies by road or use pilots to fly into dangerous areas. The K-MAX can autonomously fly a pre-programmed route to its destination and only requires human interaction to start up.

Across the Pacific, China is also experimenting with unmanned helicopter designs. In September, a Chinese company unveiled the JY-8 concept at the Second China Helicopter Exhibition in Tianjin. It is expected to begin flight trials in 2015 and will be able to reach 400km per hour. The JY-8 is a compound helicopter with no tail rotor, which shows China’s willingness to experiment in this field.

The human pilot era is not over yet

"The need for unmanned capabilities has become particularly acute during wars in Afghanistan and Iraq."

Despite a renewed focus on unmanned capabilities, militaries around the world are still investing in the development of newer manned vertical-lift aircraft. This is especially true for the US military, which has seen its helicopter fleet being work hard in the last decade in Iraq and Afghanistan. Now, there are several initiatives which are looking to replace these ageing workhorses.

The purpose of the JMR TD programme is to identify future technologies that can positively impact vertical lift aviation operations for the next 50 years.

The JMR TD programme will mitigate risk for the US military’s Future Vertical Lift (FVL) programme, which, along with the 2011 FVL Strategic Plan, aims to shape the development of vertical lift aircraft for the next 25 to 40 years. The plan indicates that nearly all the decisions to either extend the life, retire, or replace the Pentagon’s vertical lift fleet will be taken in the next eight to ten years.

"As we understand the demonstrated technologies and the opportunities for future technologies, that will feed the desired and reasonable capabilities and requirements for the potential FVL solutions," said Dr. William Lewis, director of the AMRDEC’s Aviation Development Directorate.

The first phase is seeing the US Army invest $217m in total and $6.5m to each selected company. Helicopter veterans Bell and Sikorsky were predictably chosen, but two relatively unknown companies were also awarded contracts.

The selection of radical designs from AVX Aircraft and Karem Aircraft shows the Pentagon’s desire to engage with non-traditional suppliers and push innovation. Karem Aircraft was founded by Abraham Karem, a former designer for the Israeli Air Force and the developer of the Predator UAV.

Bell and Karem Aircraft are taking tilt-rotor technology to a whole new level. The Bell V280 is similar in size to the Black Hawk but will be able to fly at 320mph while cruising – compared with the Black Hawk’s 180mph. Karem is offering the TR36TD, another tilt-rotor aircraft with 36ft diameter rotors that can lift armoured vehicles across the battlefield and cruise above 30,000ft.

Sikorsky and AVX aircraft are taking a different design approach than their competitors. Sikorsky, working alongside Boeing, has submitted a design based on their compound X2 model, which features counter-rotating coaxial main rotors and a pusher propeller.

While little-known AVX has submitted a similar futuristic design also featuring coaxial main rotors and even a large rear ramp for loading cargo. AVX has also submitted proposals for the Armed Aerial Scout programme, which is planned to replace the OH-58 Kiowa, currently in service with the US Army. Their design would transform a standard OH-58 into a compound helicopter capable of much greater speeds.

Is the future really upon us?

The reality, however, is that these helicopters may never actually see operational service.

As AMRDEC are quick to stress, the FVL programme "is an initiative; not yet a solution". The US military could simply choose to extend current fleets rather than begin brand new programmes. Financial budgets are still being squeezed and projects like the F-35 continue to demonstrate everything that can go wrong with ambitious big budget programmes. With this in mind, it may be difficult secure funding for a new vertical lift aircraft.

This is seen across the pond in Europe where there is only limited investment in new vertical lift capabilities. The UK is spending around £1bn buying Chinook helicopters, a legacy design which still serves the Royal Air Force well. But there is nothing that fits the ambitious scope of the US’s JMR TD and FVL programme.

JMR TD is being used to inform the military of promising vehicle configurations, the maturity of enabling technologies, attainable performance and capabilities and highlighting affordable technologies. Indirectly, this will also inform other militaries around the world of future trends for helicopter technology and, importantly, where to invest.

Phase two of the JMR TD is scheduled for late 2014 when two companies will be chosen to build prototype models for flight testing. If all goes to plan, flight testing is likely to begin in 2017 and we will finally get a glimpse into the future of vertical lift capabilities.